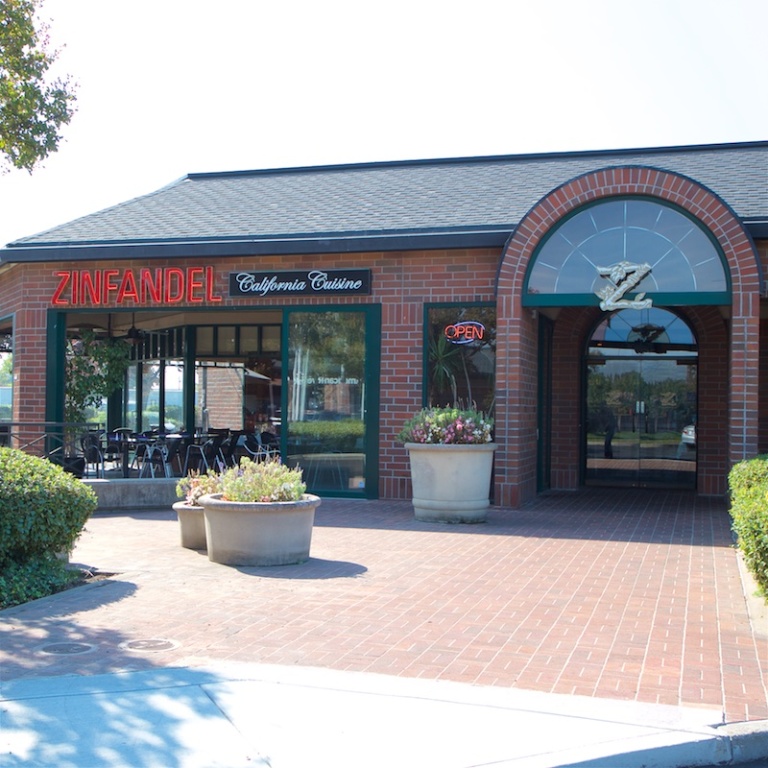 To finish out the last Friday of this blog I was joined by 3 coworkers for lunch at Zinfandel California Cuisine.  This somewhat upscale little restaurant is located on Gold Springs Court in Gold River, in the same building as Amore Cafe & Chevys.  We arrived at about 11:15 and were the first ones in the door.  The place was empty and we didn’t even see any workers right away, but very quickly a hostess emerged from the back and got us seated. 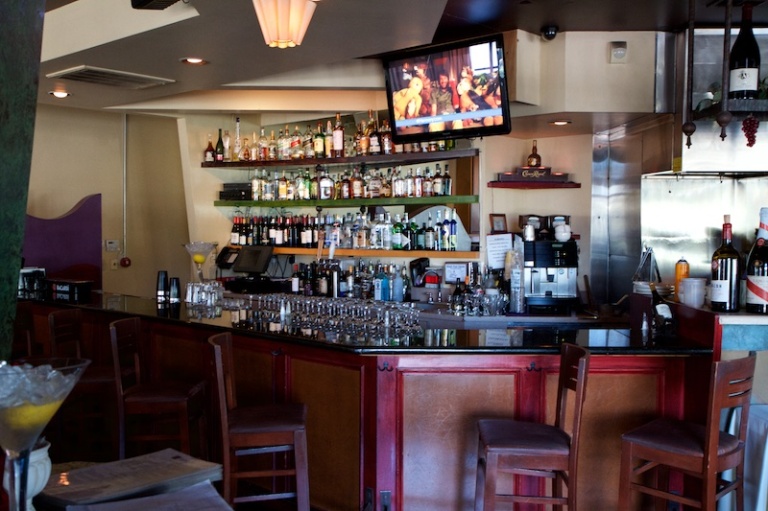 We chose the patio, which is nicely sized and has plenty of seating choices as far as how much sun you want.  Some get a bit of shade from umbrellas while others don’t, and the one we sat at was in an area wrapping around the building that can be enclosed with large glass sliding doors when the weather is not ideal.  It was quite nice today though so they had it wide open and we were in the shade of the roof.

The hostess got us drinks going and delivered some bread and butter, which we had replenished a couple times throughout lunch.  The bread was quite delicious and the butter was just soft enough to spread easily.  We looked over the menu for a bit and decided to order as a group and share everything.  The blog demands a salad, so that item ended up being (admittedly a less than typical type) a large Mushroom Salad (Sliced button mushrooms, Jarlsberg cheese and chopped parsley tossed in a Meyer lemon vinaigrette)[S:$6; L:$8].  I have to admit, despite the name and description, I really expected there to be some greens in this (other than the parsley).  It really was a pile of mushrooms with cheese in a vinaigrette.  If you like mushrooms, which I do, you’ll probably enjoy this salad.  The mushrooms were excellent and the lemon vinaigrette made it nice and fresh tasting and smelling as well. The Jarlsberg cheese was fairly strong and also quite tasty.

Next up we had the Brie appetizer (Warm brie cheese, served with fresh seasonal fruit, toasted almonds, prosciutto, dried fruit and crostini)[$12].  Obviously this description is somewhat general based on the seasonal items.  We did not get any dried fruit, for instance.  What we did get was a small pile of spinach and other greens under the brie, some delicious little cubes of pineapple, slices of apple and pear, crostini, almonds, and of course the prosciutto and brie.  The brie was unfortunately not warm, but rather room temp.  Still, it was incredibly soft and already very slowly oozing out of it’s wedge shape.  Spread on the extremely crunchy crostini it was very nice and mild.  The pears were particularly sweet and ripe.  The prosciutto was a bit salty but overall good.  Admittedly, prosciutto is not my favorite, but I can enjoy a couple bites.

For the main course we had two of their Wood-Fired Pizzas.  Every now and then we got a wonderful whiff of the smokey oven that must have been caught by the wind and brought down from the chimney up on the roof.  Love that campfire-like smell.  We ordered the Z-Hawaiian (Mozzarella cheese, tomato sauce with Black Forest ham, fresh pineapple, topped with fresh parmesan cheese and parsley)[$12] and the Prosciutto (Mozzarella cheese, prosciutto, caramelized onions, sautéed mushrooms, thyme, topped with fresh lemon arugula with shaved red onions and parmesan cheese)[$12].

I really enjoyed both of these.  The Z-Hawaiian had an interesting red sauce to it that was neither sweet nor spicy.  Usually red sauces tend to be one or the other.  This was just…different.  I could not quite put my finger on it, but it was enjoyable.  The pineapple was the same little cubes that came on the Brie plate, and the ham was cubed as well.  The prosciutto pizza was, like the prosciutto on the brie plate, a bit salty, but definitely flavorful.  This one seemed to have more cheese than the other and it was quite stringy.  The lemon arugula was fairly strong in some areas with the lemon flavor.  We decided it must just be a sprinkling of lemon juice before being put on the pizza.

Overall most of us enjoyed this lunch.  It was nice to try so many things, and split up the bill was very reasonable at just about $12 each.  The service was top notch.  We regularly had one of two girls coming by to check on us, get refills of drinks and bread, clear finished dishes and just checking on us in general.  I definitely enjoyed the patio, particularly with the fountain which helped mask any nearby traffic, even though this place is a bit back from the road.  I bet it really nice at nice when they have it lit up, I noticed strings of lights over the patio as we left.  If I lived closer I might be inclined to come do dinner here.

One thought on “#73: Zinfandel California Cuisine”